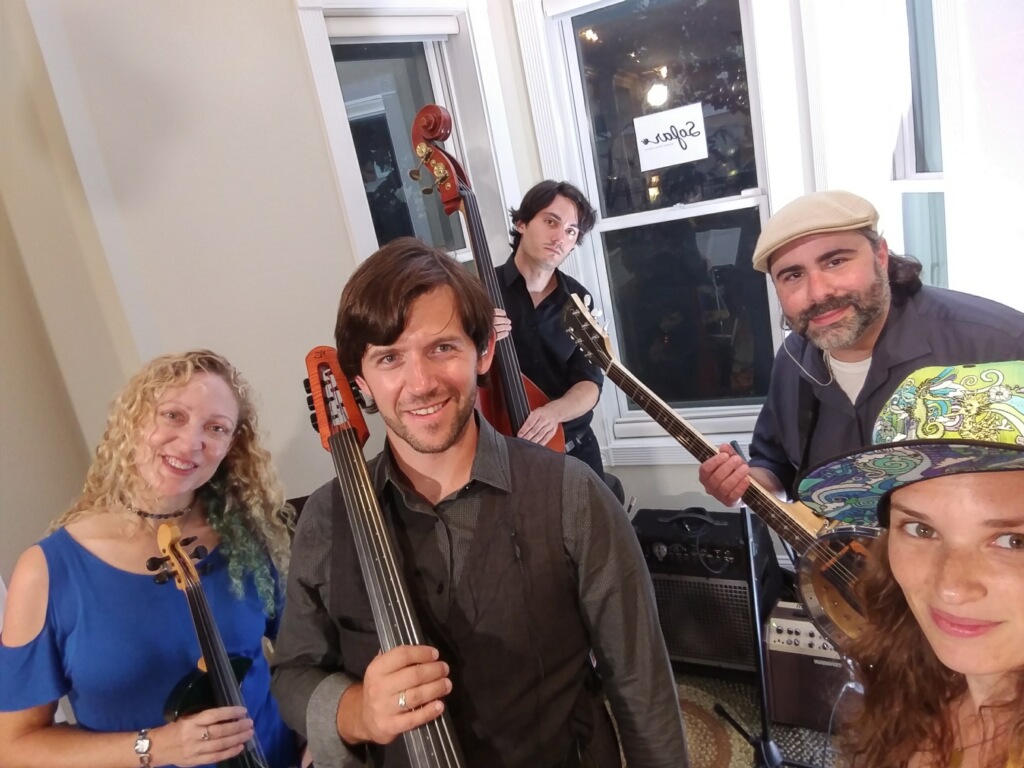 Wytold Ensemble creates original music by blending classical technique and inspiration with contemporary song structures, jazz improvisation, and progressive world rhythms. The Ensemble was selected as a top-5 finalist for the 2017 21st Century Musician Emerging Artist Ensemble Competition. Led by six-string electric cellist/live-looper/composer, Wytold, the Ensemble features double bassist/composer Ethan Foote, Celtic fiddler Chelle Fulk, Gina Sobel on flute/bass flute/alto saxophone, and jazz guitarist/songwriter Jerry Tolk on the six-string banjo. They strive to reflect each musician’s unique artistic voice and innovative style throughout their repertoire, which spans from Wytold’s classically orchestrated compositions to his remixes of famous classical themes and instrumental covers of modern pop and rap songs. Wytold’s original music has been featured in live theater, modern dance, and film, and he has performed his compositions with the National Symphony Orchestra at the Kennedy Center in Washington, DC. Click here to watch their performance at the Kennedy Center Millennium Stage.

Ethan Foote is a bassist, composer, arranger, and songwriter based in Washington, D.C. His original work and his career as a performer have encompassed jazz, folk, classical, and popular idioms, as well as interdisciplinary collaborations involving theater and visual art. He regularly accompanies folk artist Marian McLaughlin, whose work he has arranged for string ensemble and with whom he performed in the Tiny Desk Concert series at NPR.

Chelle Fulk is a versatile violinist/violist/vocalist. Her talent and professionalism can be found on stage or in the studio with Celtic, jazz, pop and rock bands, classical string trios and quartets, Latin ensembles and more. Besides playing fiddle and electric violin with her own Celtic band, Keltish, she performs with the Anthem String Quartet, and has appeared with Coyote Run and String Theorists.

Gina Sobel is a multi-instrumentalist specializing in flute, voice, saxophone and composition. She received her BA in music from William and Mary in 2007 and subsequently moved to Charlottesville, VA where she leads several groups of her own, blending her love of jazz, rock, funk and Americana.

Jerry Tolk is a talented multi-instrumentalist and songwriter with roots in rock, blues, and jazz. He has formed and collaborated with many DC bands on guitar, banjitar, bass, and drums. With Wytold, Jerry plays rhythmic chords and lead solos on six-string banjo, and ‘glues it all together’ with electronic percussion on the Handsonic.